Colourful, chewy but crisp on the outside, delicate but full of rich flavours hidden in the fillings. Macarons are becoming ever so popular these days. Internet is flooded by these brightly coloured sweets, sometimes with rather fancy and exotic fillings. They are most certainly nothing new, as the first mention of macarons dates back to the sixteenth century! At the time there wasn’t any filling to join two macaron shells together. That changed only at the beginning of the twentieth century, when Pierre Desfontaines, the grandson of Louis Ernest Laduree, decided to use chocolate ganache.

Some say that making these delicacies is not easy, even though the ingredients are so beautifully simple. To make things even trickier, there are two different ways of preparing the meringues for your macarons. You can either follow the French technique or the Italian one. I prefer using the French method, as it does not involve any use of the temperamental hot sugary syrup.

You can experiment with any colour you wish, but remember to use either gel or powder food colouring. Introducing additional liquid to meringues would ruin the macaron. I added one teaspoon of cocoa powder to my meringues to complete the chocolate theme.

Whip the egg whites until still. Keep in mind that you have to add the caster sugar gradually while you are whipping the egg whites. This allows the macaroons to develop their characteristic shine. Sift flour and icing sugar in a separate bowl and add ground almonds. Slowly fold the flour mixture to the egg whites and be very careful not to over-mix.

Transfer the mixture to a piping bag and pipe onto a baking sheet. Always make sure that all piped macarons are the same size, as making them in different sizes would burn the smaller ones. Drop the baking tray on a flat surface to allow air bubles to come out: in simpler words, knock the air out. Allow to stand for 10-15 minutes until the surface of each macaron is no longer sticky. This allows the macaron to rise evenly when baking. Preheat the oven to 170°C/150°C fan/mark 4.

Put into the oven for 10-13 minutes. Keep checking during the baking as you might need to rotate the tray to allow an even bake.

Once baked, allow to cool down, and then transfer from the baking sheet. Be careful when taking macaroons shells from the baking paper as they are very fragile and sticky. 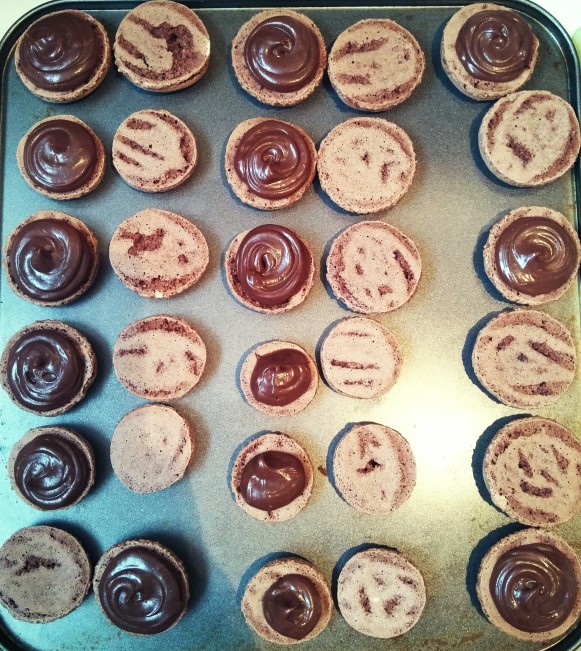 Match two shells so that their size will be as similar as possible. Pipe a little bit of chocolate ganache on one macaron shell and sandwich together with the second one. Leave to cool in the fridge. Macarons are best on the next day and ideally kept in the fridge. Take them out of the fridge about an hour before eating, to allow the ganache to warm up to room’s temperature.